Cycling routes during the holidays

Many customers ask us if we know beautiful cycling routes that they can cycle during their holiday in Spain. Of course! Since we discovered Strava thanks to a customer, a route world has opened up for us. Strava can be used anywhere in the world, including in Spain.

Strava is more than just a route planner or GPS. It is a very advanced app with a global tracking function. It forms a combination between a route planner, a social media account, an activity log and an analysis tool.

Are you that runner, cyclist or triathlete? Strava can be used for all these purposes. Everywhere in the world there are roads and paths registered by athletes on Strava. This makes it possible to create a route at the destination that you want to use for cycling, for example. Do you prefer to use existing routes? You can do this by searching through our Allure Bike Rental account for the routes that we have already set out for you on the Costa Blanca.

Athletes like to share their activities with friends. On Instagram you see daily posts from their ride passing by. You often recognize a Strava account in this. The recorded activity will appear in your logbook and friends or followers can see it. They can also use your route or value your performance or post a comment. There is nothing better than sharing your sporting adventures with others. 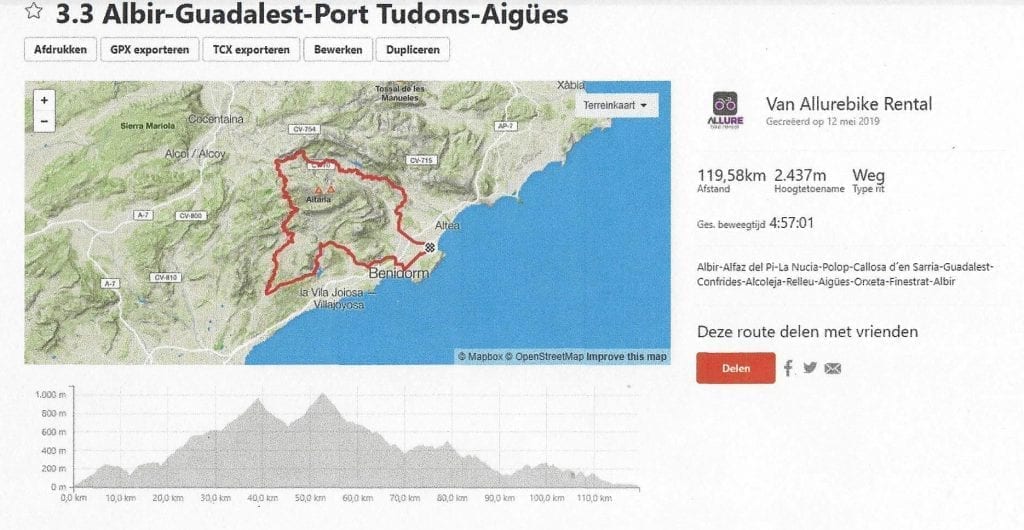 You can create and maintain a sophisticated training plan via Strava. Both runners and cyclists can formulate goals and challenges. A large number of aspects of your activity are recorded by strava. This is synchronized via your phone or GPS device such as Garmin, Fitbit, Timex, Polar, Suunto and many others. This concerns, for example, distance, altitude meters, average speed, calories consumed, etc. This can be used as a useful analysis tool to achieve your final training plan.

The paid version of Strava, Summit also offers an additional training package, safety and analysis tools. Athletes often go beyond their own limits. This can entail risks. Both physical and mental injuries are the result. But something can also occur on the road, which makes it extra nice that you can be followed during your activity. Your location can then always be determined via Strava Summit. This provides an extra sense of security during exercise.