The story behind wine gums in cycling

The story behind wine gums in cycling

In cycling today, nothing is left to chance. Especially when it concerns top sport, people spend years figuring out, weighing and measuring the right nutrition schedules for the athletes. The coaching team and staff are larger than the average cycling team has riders. Much is also approached scientifically. But what is the story behind wine gums in cycling.

How do wine gums fit into the life of a top athlete?

Winegums are full of carbohydrates and sugars. Sugars are converted into glucose, which is stored in the muscles and liver. This glucose is necessary to be able to deliver a top performance. In the run-up to a tough competition you have to make sure that your body is stacking enough carbohydrates. In endurance sports in particular, there is a constant need that must be supplemented. There are all kinds of gels and sports drinks on the market for this. But even after a competition you have to replenish sugar and carbohydrates within half an hour. Many riders eat a handful of gummy bears.

During the Giro D’Italia won by Tom Dumoulin, it turned out that he had quite a bit of trouble with his intestines. The image of his sanitary stop is still on the minds of many. This was mainly due to the carbohydrates. These ensure that a certain amount of fluid ends up in the intestines. As a result, it has to come out again. Tom’s training buddy, Rieff said after the win that Tom had been living on wine gums and chips for a few days before his important time trial. 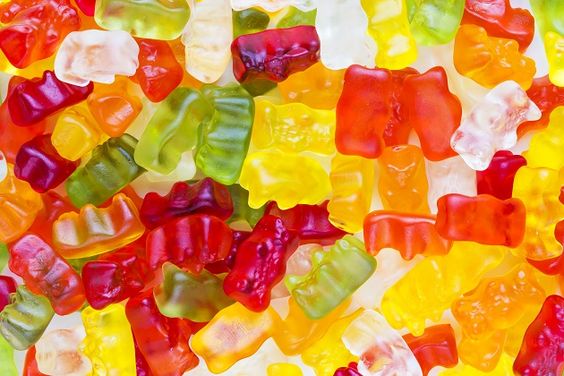 Caffeine is known for improving concentration, focus and responsiveness. It provides a mental and physical stimulus during exercise. You become more alert and pain and fatigue are temporarily reduced. In addition to the caffeine, the gummies also contain carbohydrates, which can replenish the energy reserves. One of the many manufacturers is Etixx, they market the gums with a delicious citrus taste.

Why a whole story about wine gums and top athletes? What does that have to do with our readers and customers? A large part of our customers come from countries in North-West Europe. Some are used to driving mainly on flat roads. Others often drive at average temperatures of about 15 – 20 degrees maximum. When our customers rent a road bike from us, they naturally want to be able to enjoy it. However, with the much higher temperatures and the mountains around us, that costs a lot of extra energy. It is important to replenish them in time. In addition to sufficient water to hydrate, it is also important to take a sports drink, gel or sports gums with you on the bike. Even if we are not all Tom Dumoulin, every sporting effort deserves good preparation.