Coll de Rates, an extremely popular mountain to climb on a road bike

Clichés are there because it is true: The Coll de Rates is an extremely popular mountain to climb on a road bike. This mountain is certainly not the toughest nor the steepest climb on the Costa Blanca. Yet it is one of the best known and famous mountains. Cyclists from all over Europe come to undertake this climb throughout the year. Do you also have plans to meet this challenge? Then book your Carbon Stevens Ventoux Disc Ultegra (Di2) here.

That this mountain is still a favorite is easy to explain. The Coll de Rates can be driven from two sides. This makes it easy to reach from just about all holiday destinations on the Costa Blanca. For that reason, this climb is included in a number of routes on our Strava account. You´ll find them – as well as other influenced climbs – on Strava.com and search for Allure Bike Rental.

From the North the route starts from the Jalón valley, Benissa from the village of Parcent. Parcent is surrounded on all sides by mountains. It is one of the eight villages that together belong to El Vall del Pop. There is generally little traffic here, which makes the climb safe. The gradual progression is also good for less experienced riders. From various points there is an excellent view over the villages in the valley below and over the Mediterranean Sea. The enthusiasm of many professional cyclists to climb the Coll de Rates is contagious. As a result, many recreational cyclists also come to Coll de Rates more and more often. 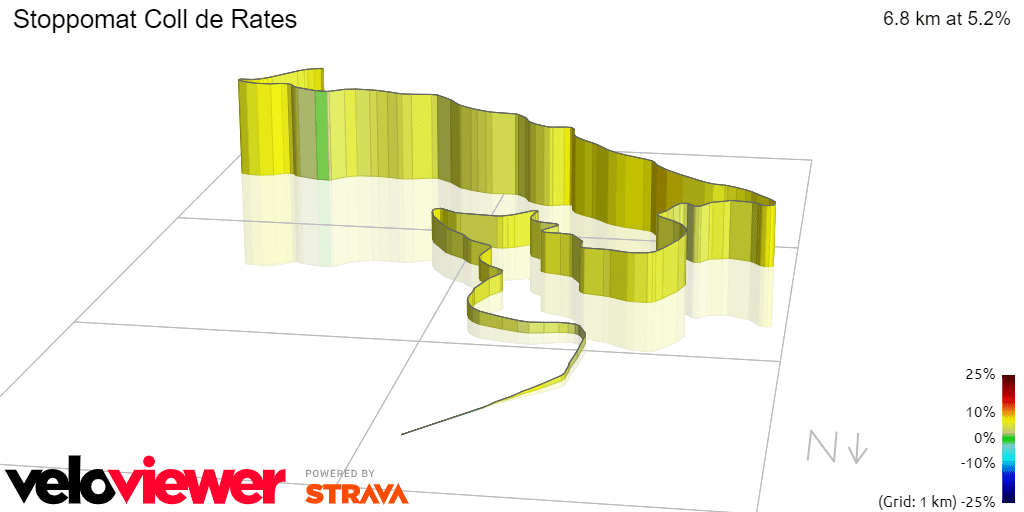 Perhaps not so popular is the climb to Coll de Rates from the south. This starts in the village of Callosa d’en Sarrià and is considerably longer than the northern approach. There it has several sections that are steeper. Overall, the climb is more irregular but with a lower average course.

Central to the Costa Blanca

The climb is a short distance from many of the other popular cycling climbs and fairly centrally in the Costa Blanca. This mountain can therefore be reached without problems by bike from the village of Jalón and the coastal towns of Denia, Javea, Calpe and Benidorm.

Climbing the Coll de Rates on the road bike is often used for official training. For example using the Stoppomat. The riders can activate this machine as a time clock at the start of the route. Once the top has been reached, the clock can be clocked out, so that they know how long the climb has lasted.

In summary: Almost every cycling enthusiast has the climb of the Coll de Rates on his list!